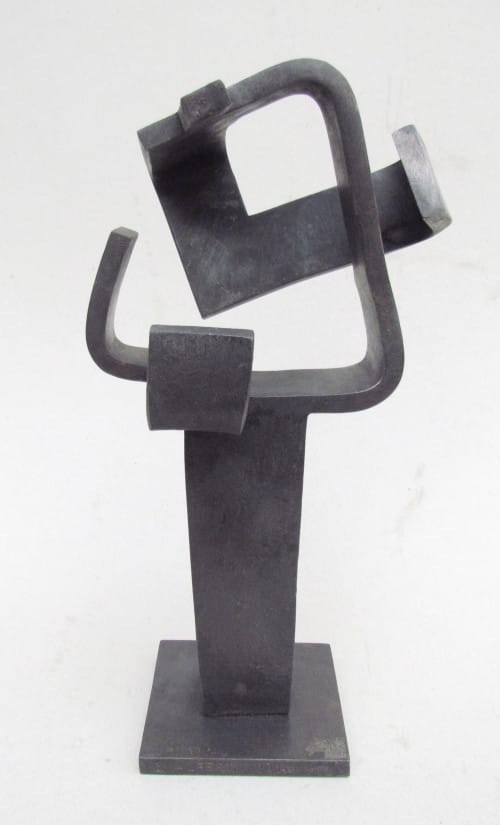 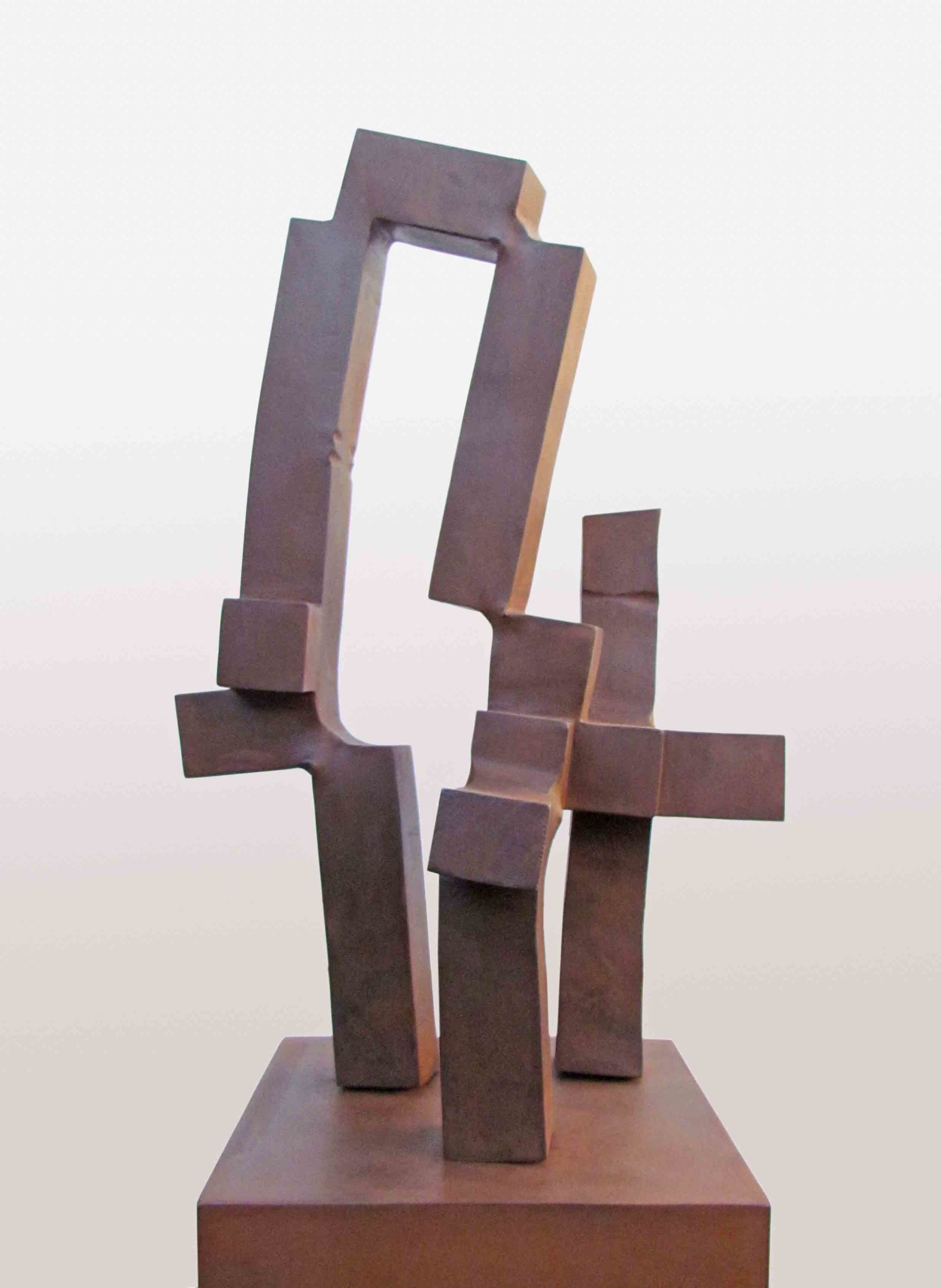 Carlos Albert was born in Madrid on 1978. Today, his work can be seen in squares and parks of many cities besides being part of important collections in different parts of the world.

Carlos Albert’s academic training began at the Faculty of Fine Arts in Madrid (1996). In 1999, through a grant from the Marcelino Botin Foundation in Santander, he met the sculptor Martín Chirino, in whose workshop, Albert was trained in forge and sculptural design, awakening a great artistic interest in him. With this inspiration, Albert produced works, in which he imprinted his ideals to highlight the traditional values of Art, in a confusing time for the young sculptor. From this moment a large amount of meetings and exhibitions took place, where the scilptor showed his work in different museums, institutions and cultural centers as well as in the headquarters of the Marcelino Botin Foundation, in Santander.
In 2000, thanks to a grant provided by the Complutense University of Madrid, he continued his studies in the Camberwell College of Arts (The London Institute).The British capital offered him a broad human and artistic perspective, making him further consolidate his understanding of art. That year made a significant impression on him, as he made his first exhibition in an art gallery, participating in “Férreas Voluntades” (“Ferrous Wills”) organized by the Gallery Raquel Ponce of Madrid.

In 2001 Albert traveled with a grant from the Ministry of Culture of Luxembourg to participate in the courses of the European Circle for the Propagation of the Arts. Caja Segovia purchased one of his works, which was incorporated into the Museum of Contemporary Art of Ayllon (Segovia) and he graduated in Fine Arts from the Complutense University of Madrid, where he also won the First Prize in the Visual Arts Competition.

This was an intense period in which Albert had his first contact with exhibitions through several competitions and scholarships, receiving in 2002 the First Prize for Sculpture at the University of Seville, and a scholarship from the Elsa Peretti Foundation. The same year he participated in a group exhibition with works including those of his teacher Martin Chirino at the Atlantica Gallery Center of Art, in La Coruña. As far as monumental work is concerned, that year he debuted making two outdoors sculptures for the City Council of Mostoles (Madrid).

In 2003 Albert he was academically linked to the Faculty of Fine Arts until the end of his Ph.D. coursework. That year he won the First Prize in the National Contest “Fernando Quiñones” of the City Council of Cadiz. After participating in several group exhibitions in 2004, Albert continued working and in 2005 he obtained different awards and commissions that consolidated him as monumental sculptor. The prize of the contest “Inves-Morrazo” gave him the opportunity to render a sculpture of 6 meters in Cangas de Morrazo (Pontevedra). The prize from the contest “Urban Culture” of the Urban Planning Department of San Fernando (Cádiz) allowed him to create a work in bronze plate of over 3 meters.

Commissioned by the City Council of Parla (Madrid) he erected the sculpture “Puerta de la Tolerancia” (“Gate of Tolerance”), over 15 meters high and 20 wide, which serves as a gate to the city. That same year he also received the first prize of a contest sponsored by the City Council of Malaga, for which he designed the commemorative sculpture to the Awards for Volunteering in the city, and the International Prize of Sculpture of the City Council of San Fernando de Henares (Madrid). The Consistory of Punta Umbria (Huelva) incorporated one of his works in the municipal collection through “El Monte” Foundation and its Iberian Sculpture Prize.

“Espacios Forjados” (“Forged Spaces”) was the title of the personal exhibition that Carlos Albert made in the Gallery “Cuatro Diecisiete” in Madrid, in 2006. Added to the success of the exhibition, he earned two commissions from the City Council of Santander for two separate monuments that culminated in 2007 with the installation of the popular “Monumento a la Mujer Quesera” (“Monument to the Cheesemaker Woman”): a unique interpretation in bronze, which is located in the Municipal Market of the Cantabrian capital. The same year, Albert also received a particularly emotional commission, which was both an enormous honor and profound responsibility for him: the creation of a memorial monument to the victims of the horrible terrorist attacks in Madrid on March 11th, 2004. The sculpture was inaugurated to coincide with the third anniversary of the tragedy, in front of the train station of Santa Eugenia.

In 2008 Albert got new awards in such consolidated competitions as the “Victorio Macho” of the City Council of Palencia, the “Bragagnolo” of Majadahonda City Council (Madrid) and the “City of Melilla” of the autonomous city, receiving First Prizes in all contests. That year the City Council of Punta Umbria in Huelva, acquired, once more, one of his works for the municipal collection through the Iberian Sculpture Prize. At an exhibition level, Albert celebrated the individual exhibition “Encuentros” (“Encounters”) in the Madrid Gallery “Cuatro Diecisiete”, in addition to an exhibition in “Atlántica Center of Art” (La Coruña), incorporating his work on the Collection of Novacaixagalicia Foundation.

“Blanco sobre Negro” (“White on Black”) was the title of the exhibition held in 2009 in Pamplona. This time, in the Gallery Fermin Echauri, Albert shared the headline with some of the most recognized artists who have become indisputable influences for him. Later that year, another of his outdoors sculptures was installed in Camarma de Esteruelas, Madrid.

In 2010 Albert’s highlights were the individual exhibition “Espacios Forjados II” (“Forged Spaces II”) in the Gallery Bat Alberto Cornejo, which had an excellent reception by the public and critics, as well as another First Prize in the Sculpture Competition “Ciudad de Melilla”. That year his works were contemplated in several exhibitions.

Under the title “Jóvenes Valores de Arte Contemporáneo” (“Young Contemporary Art Values”), the Van Dyck Gallery of Art in Gijón presented in 2011 the exhibition in which the work of Carlos Albert was ratified as a firm value of contemporary art. Also the Gallery “Fernan Gomez Arte Contemporáneo” in Madrid showed his work. That year, Albert signed with the City of Salamanca for the installation of a monumental sculpture.
Year 2012 was marked by the edition of the book “Carlos Albert, escultor”, written by the Chairman of the “Asociación Española de Críticos de Arte” (Spanish Association of Art Critics/AICA Spain), Tomás Paredes, which aims to make a comprehensive review of his early years as an artist. That year he was also provided with the Prize “Fundación Sevillana Endesa” by the Royal Academy of Arts “Santa Isabel de Hungría”, Seville. He had some exhibitions such as “Espacios Forjados III (“Forged Spaces III”) at the Gallery Bat Alberto Cornejo in Madrid, Fermín Echauri Gallery in Pamplona, Atlántica Art Gallery in La Coruña, Cartel Fine Art Gallery in Málaga, too.

In 2013 it started his international career inside of the European artistic panorama with his Solo show “Zeichnen im Raum” in 100 Kubik Gallery, in Cologne, Germany, together which he is participating since then in several Fairs such as “Karlsruhe” in Germany or “Kunst Zurich” in Switzerland, where it is shown his work. In 2014 this Gallery celebrated again a new Solo Exhibition under the title of “Begegnung”.

In 2015 Fermín Echauri Gallery reinforce his support to the sculptor offering him a new exhibition and the Aranda de Duero City arranges an exhibition to show his outdoors sculptures in collaboration with Rodrigo Juarranz Gallery. One the most important works of this sample is currently sited in the City Center.

Year 2016 is mainly highlighted by three important events in his artistic evolution: one, the Monographic Exhibition “Albert, 2012-2016” at the Contemporary Art Museum Infanta Elena in Spain coinciding with the publication of his second book with the same title; two, the exhibition “Sculptures in freedom” (outdoors sculptures), in Segovia, Spain, giving place to the acquisition by this city of a Sculpture with 6m. of span, and three, the starting point of the collaboration with Cordeiros Gallery, in Porto, Portugal which will be representing his work at USA Fairs such as “Art Miami 2016”.

Since Carlos Albert began his career as a sculptor, he has participated in a myriad of shows, contests, and exhibitions, being selected as a finalist in several national and international competitions.