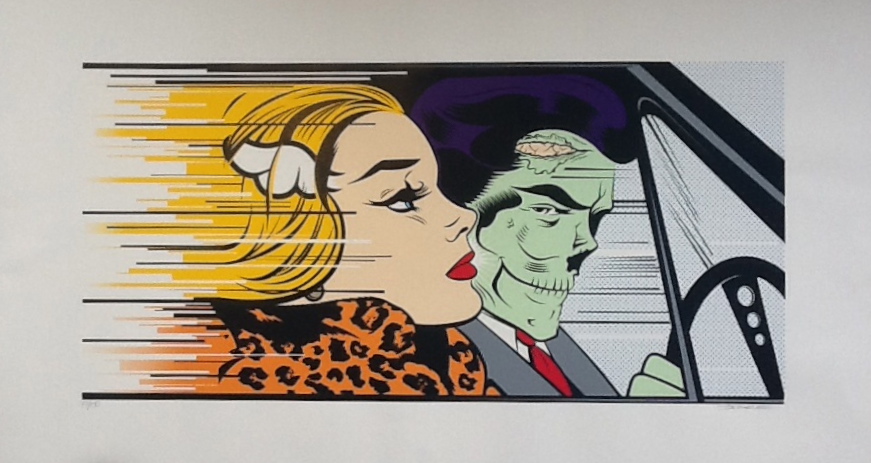 D*Face is an English street artist who uses spray paint, stickers, posters, and stencils. “D*Face”, a.k.a. Dean Stockton, grew up in London and had a childhood interest in graffiti. He attended an illustration and design course and worked as a freelance illustrator/designer whilst honing his street work.

D*Face is one of the most prolific contemporary urban artists of his generation. Working with a variety of mediums and techniques, he uses a family of dysfunctional characters to satirise and hold to ransom all that falls into their grasp – a welcome jolt of subversion in today’s media-saturated environment.

His aim is to encourage the public not just to ‘see’, but to look at what surrounds them and their lives, reflecting our increasingly bizarre fascination for with celebrity, fame, consumerism and materialism, re-thinking, reworking and subverting imagery drawn from a refuge of decades of materialistic consumption, imagery appropriated from currency, advertising, comic books, these now iconic motifs, cultural figures and genres are subverted to comment upon our conspicuous society.

Past examples include his collaboration with H.R.H Queen Elizabeth II on a series of bank notes that were put into circulation for an unsuspecting public to notice in their change. Then, to commemorate the instatement of Pope Benedict XVI, the Vatican commissioned D*Face to paint a portrait. The piece was shown for the first time at the Outside Institute in May 2005, as well as on MTV Rome, to critical acclaim.

D*Face uses the term  – aPOPcalyptic –  to define his work, a metaphorical backdrop for the corruptive persuasive consumerist folly that has been force fed into our society, a blend of ‘pop art’ spliced with fragility of life, his work reflects our popular culture encompassing the American dream and the false ideal of ‘good’ triumphing over ‘evil’, no longer relevant in todays society. His imagery delivers the viewer a moral dilema, embrace or reject, laugh or deny.