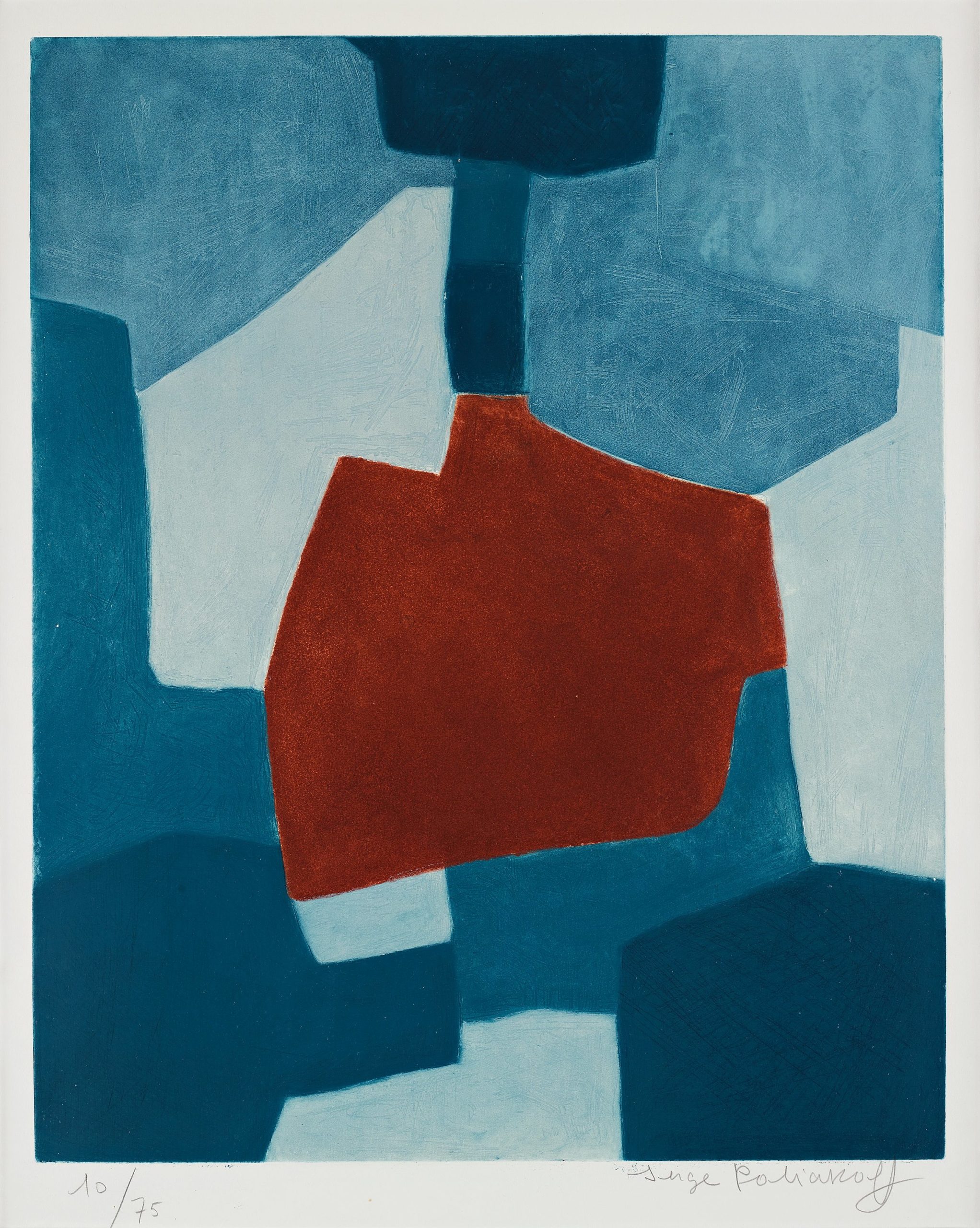 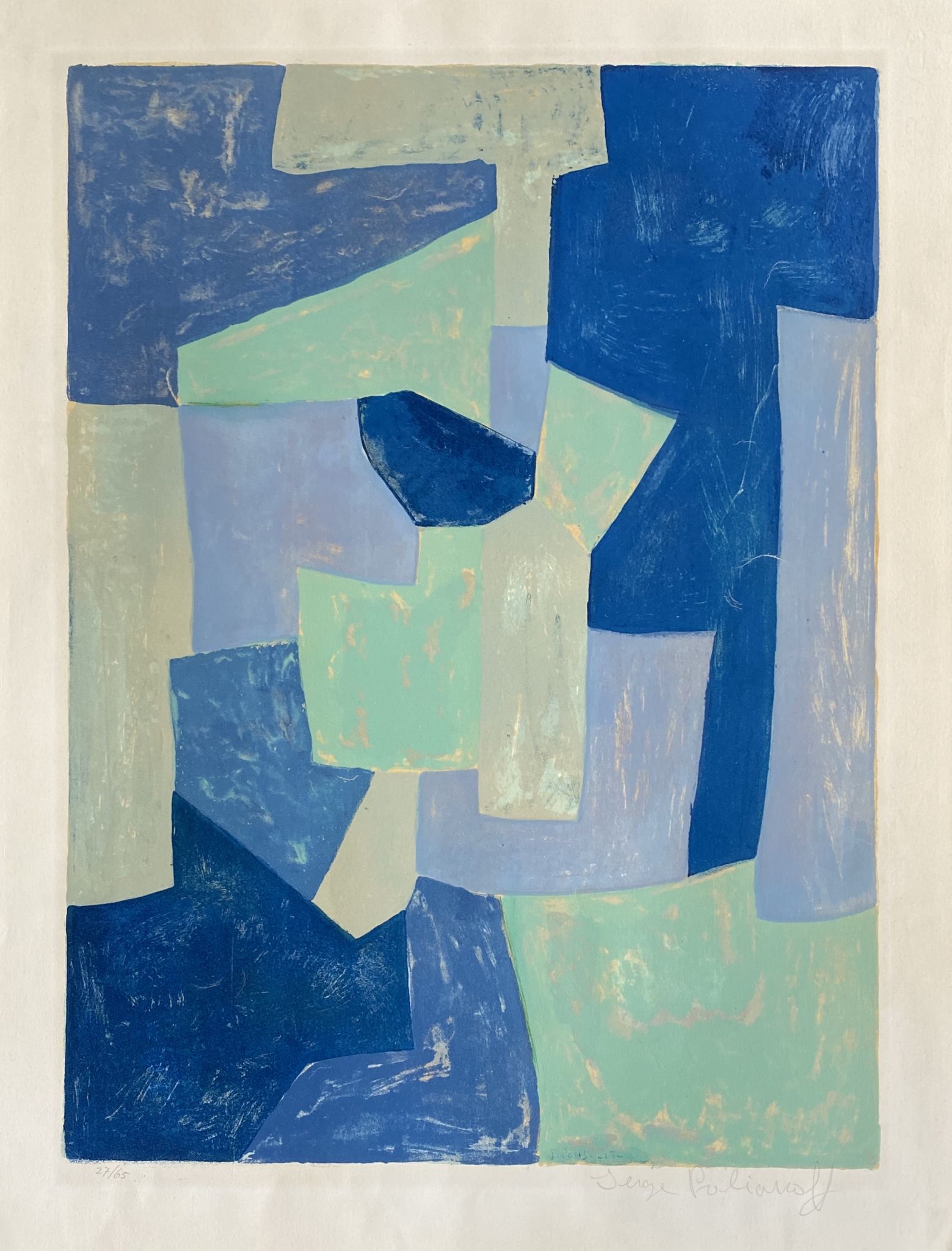 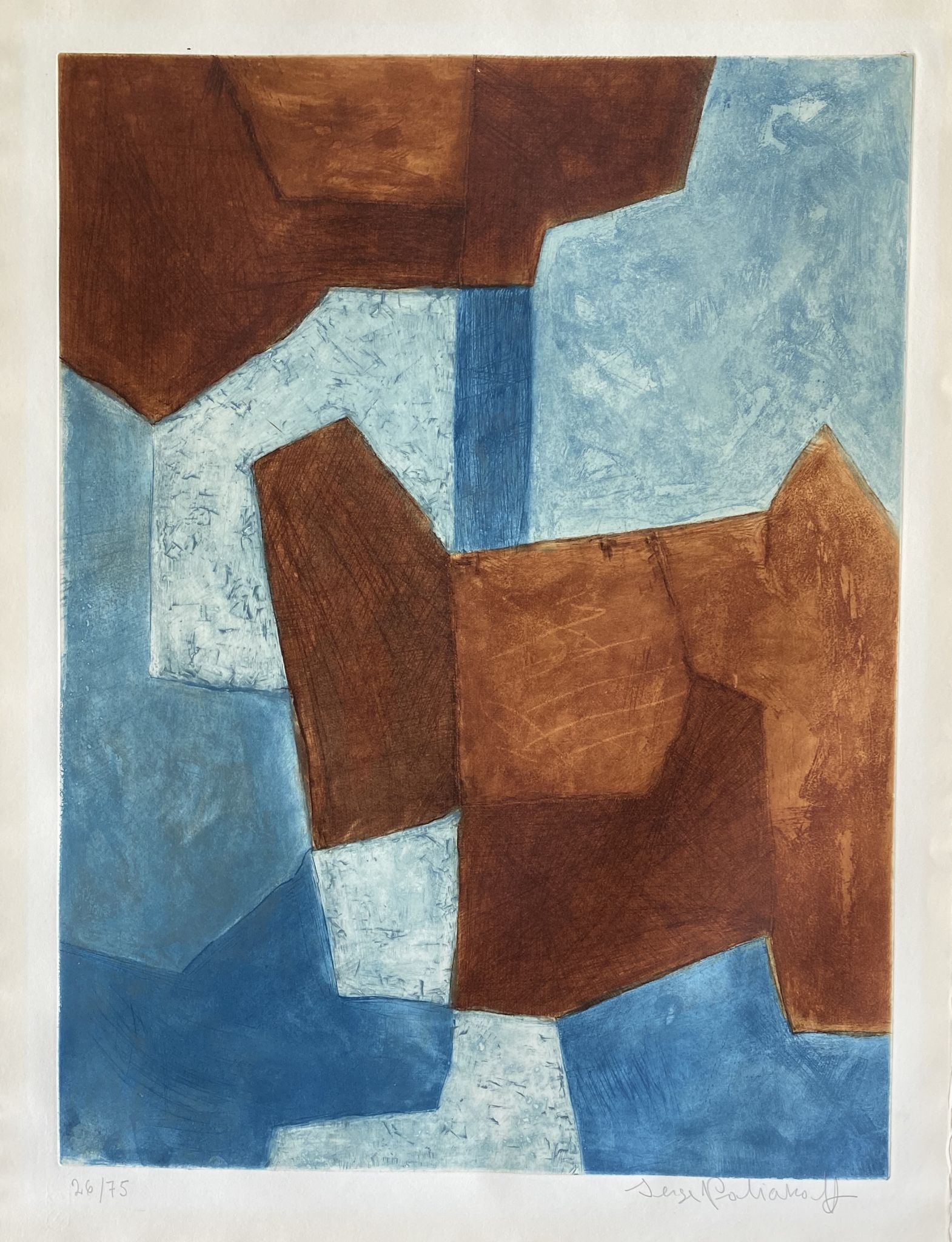 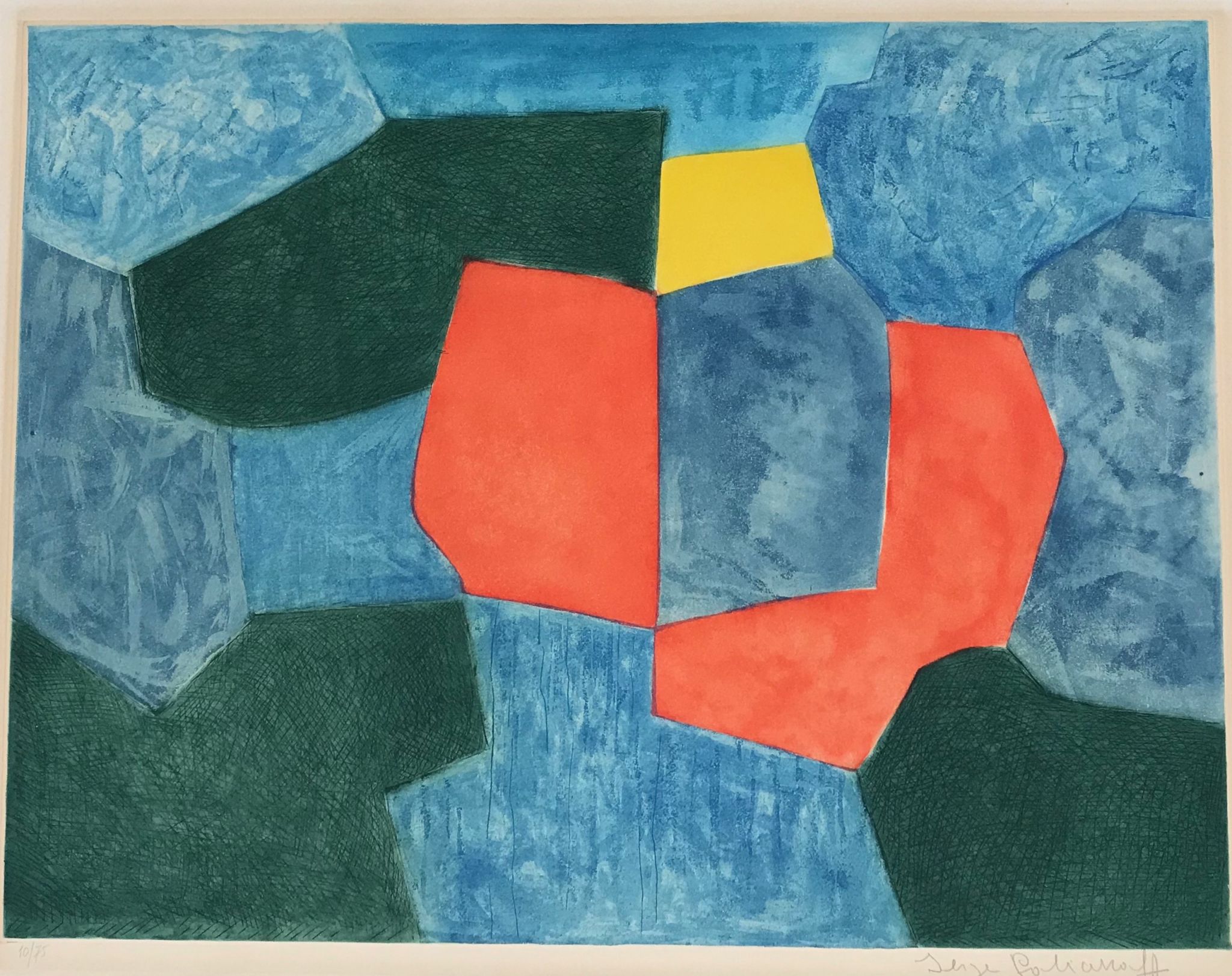 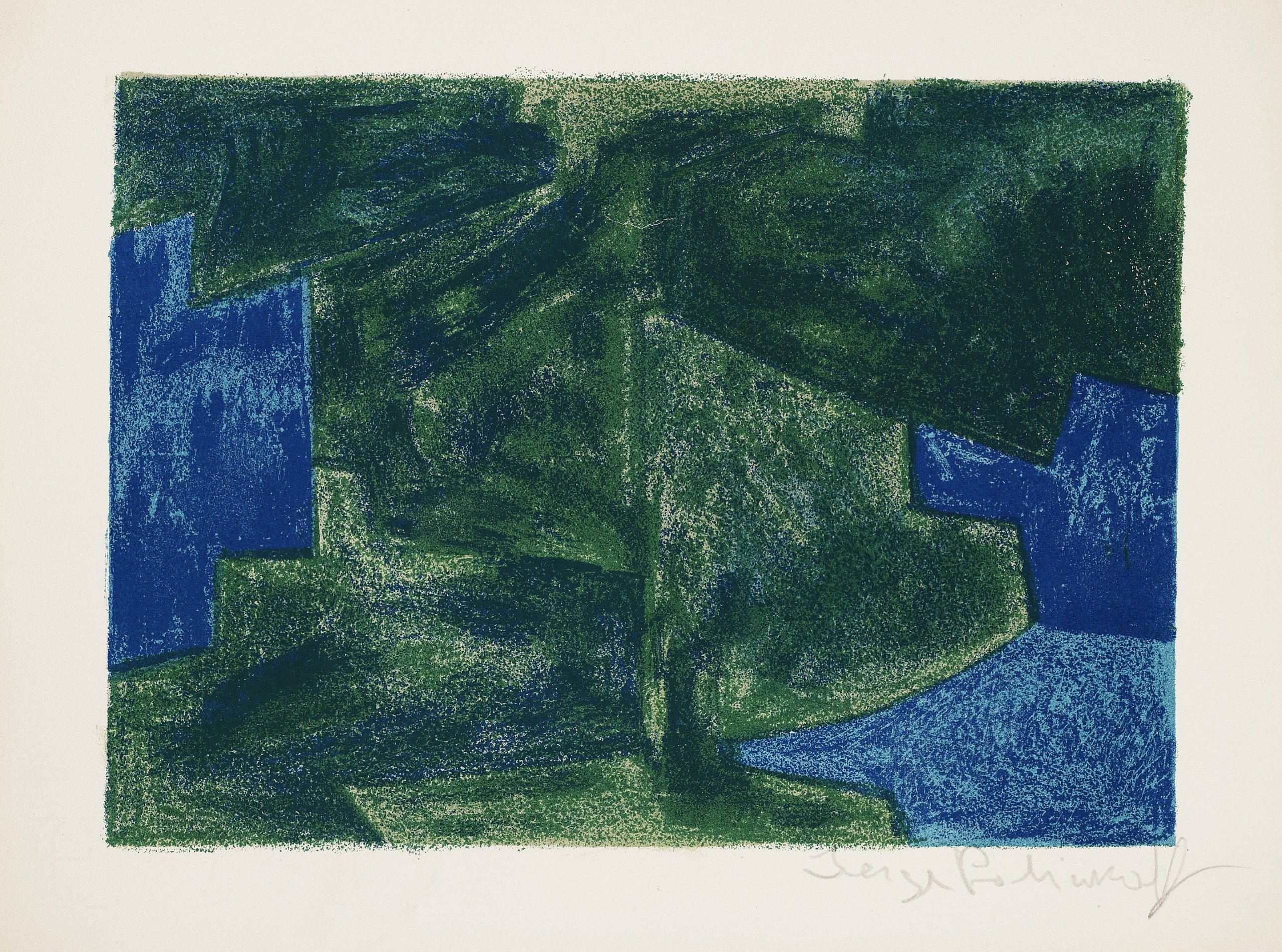 Serge Poliakoff was born in Moscow in 1900, the thirteenth child of what would eventually be fourteen.
He enrolled at the Moscow School of Painting, Sculpture and Architecture, but fled Russia and the Russian Revolution in 1917. He arrived in Constantinople in 1920, living off the profits from his talent as a guitarist.
He went on to pass through Sofia, Belgrade, Vienna, and Berlin before settling in Paris in 1923, all the while continuing to play in Russian cabarets. In 1929 he enrolled at the Académie de la Grande Chaumière. His paintings remained purely academic until he discovered, during his stay in London from 1935 to 1937, the abstract art and luminous colours of the Egyptian sarcophagi.It was a little afterwards that he met Wassily Kandinsky, Sonia and Robert Delaunay, and Otto Freundlich.

With these influences, Poliakoff quickly came to be considered as one of the most powerful painters of his generation. In 1947, he was trained by Jean Deyrolle in Gordes in the Vaucluse region of France amongst peers such as Schneider, Giloli, Victor Vasarely, and Jean Dewasne. By the beginning of the 1950s, he was still staying at the Old Dovecote hotel near Saint-Germain-des-Prés, which was also home to Louis Nallard and Maria Manton, and continuing to earn a reliable income by playing the balalaika. A contract enabled him to quickly gain better financial stability.

In 1962 a room was given over to his paintings by the Venice Biennial, and Poliakoff became a French citizen in the same year. His works are now displayed in a large number of museums in Europe and New York. Poliakoff also worked with ceramics at the Manufacture nationale de Sèvres. He influenced the paintings of Arman.